A project I've wanted to take on for a while now is to build  Zone Mortalis table.  I looked into a number of different options for how best to go about it, in the end I stumbled upon a particularly awesome set of products over at www.hirstarts.com.  They sell molds of modular terrain components you then cast copies of and use like legos to build your own terrain. 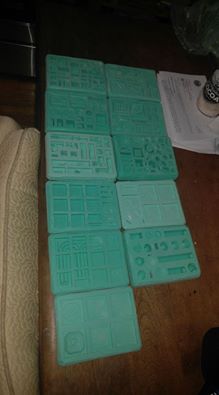 A week later and my 11 molds arrived.  The rubber is really high quality, good tensile strength and very durable.  It also came with some great tips on maintenance and storage which will be quite helpful for newbies.
Read more »
3 comments:
Labels: Conversions, Molds, Resin, Terrain, Zone Mortalis

I've been chugging along on my scratchbuilt Ork Fleet over the last week and I've made quite a lot of progress. The Kill Kroozer and Basha Light Kroozer from last week have now been joined by a Terror Ship (Horrible name, I call it a Karrier), 5 Slaughter escorts, 4 Onslaught escorts, and 5 Brute Rams.

These conversions are really fun and they move pretty fast, almost makes me want to play orks in 40k. Anyways onto the pictures (there's a bunch...) 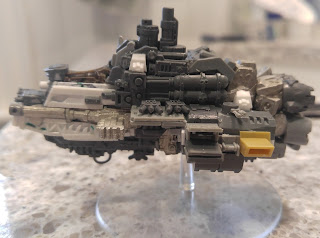 Recently I've gotten some of the local guys interested in Battlefleet Gothic so I've been working on completing my two scratchbuild fleets. I loved this game when I was in college and I still had a sizeable Imperial Fleet, but a few years back for fun I started working on a Tyranid Hive Fleet made from spare parts and with an originally sculpted Hiveship. As one of the local guys is an Ork player I promised to build an Ork Fleet from scratch. It's been a fun challenge so far, here are the first two completed ships. 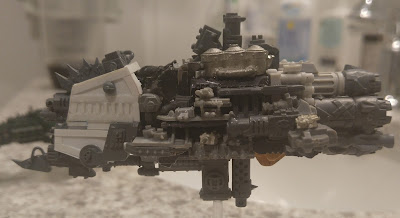 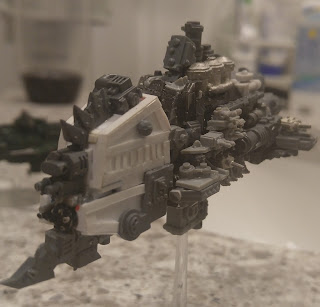 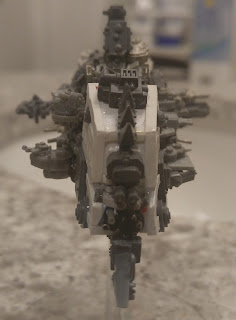 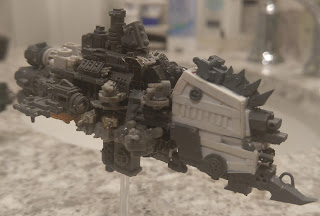 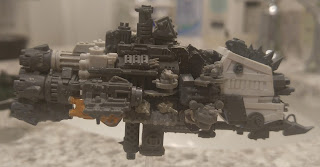 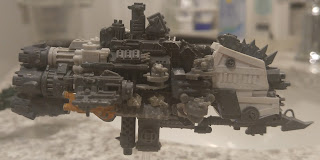 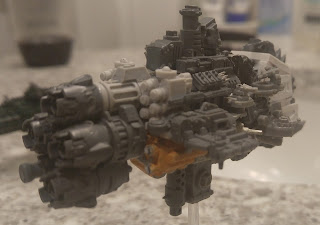 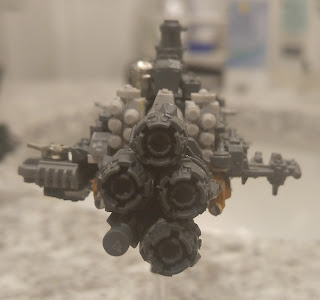 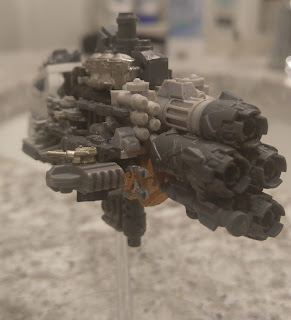 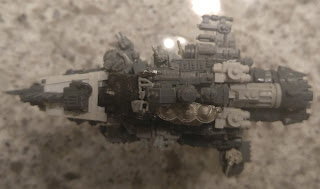 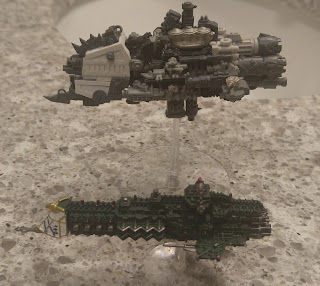 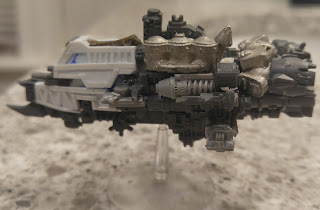 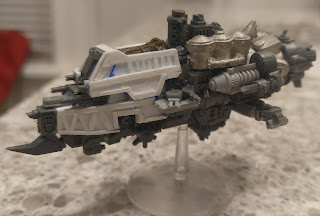 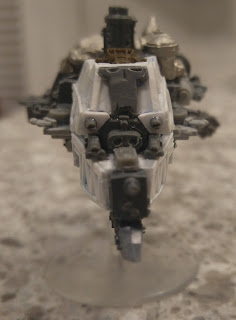 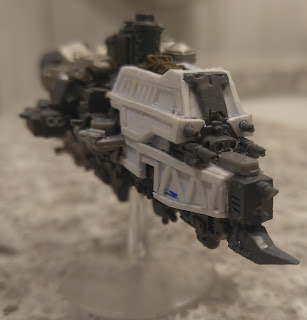 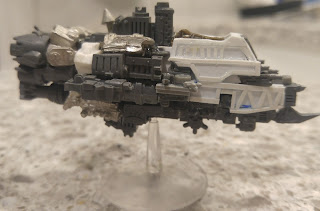 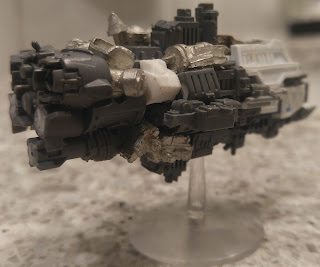 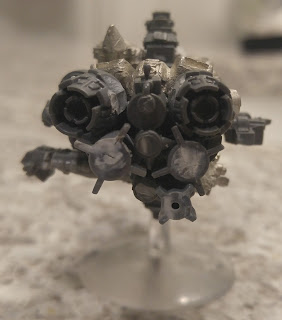 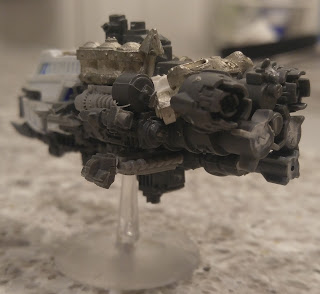 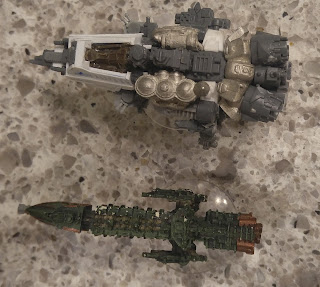 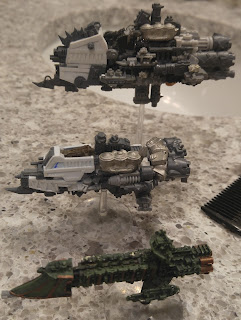 I've also made over a dozen escorts, I'll post pictures of them soon. Unfortunately I've run out of Ork bits (I don't play them myself) so I'll need to ask around to see if anyone has some they don't need. I'm about halfway finished with another Kroozer, this one is turning out to be huge though so I'll probably make it a Battleship.

More to come on these guys and my hive fleet soon.

This year the Rhode Island X-wing & Armada Club hosted a 3 day long Narrative Campaign event at Templecon in Warwick, RI.  The event went well, especially given it was our first time running anything like this, and we had a pretty decent turnout of players each day.  Here's a quick recap of its truly EPIC final battle. 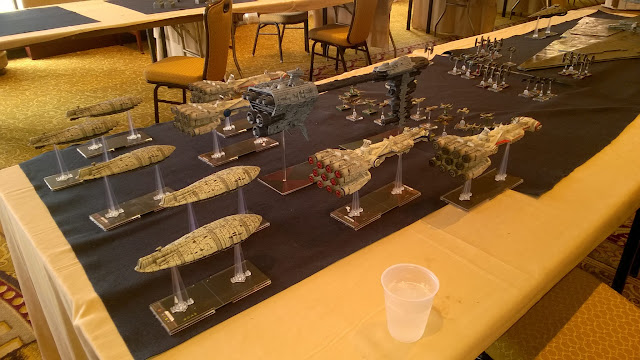 This is a cool milestone to hit, though its taken me a while given my long period of very intermmitent posts.  Anyways thanks to everyone who reads this blog, My goal is to reach 200 posts before this time next year, ambitious I know but as long as I keep making new stuff to post about its doable.

Normally most other bloggers add some large expansive retrospective monologue about how much their blog means to them and reviewing works they've done over time.  Rather than do that I'll just say that this blog has been a cool way to show off my work and that its nice to see how my skills have improved over the last few years.  I could also talk about my feelings towards GW's products as well as other games, but the summary is GW's games really aren't very fun to play for me anymore and haven't been for a number of years.  The game's become a series of fixed outcomes where half the time there's really no point in playing out the match, you can just look at your opponent's army and know exactly what will happen before either player even sets up.  By contrast X-wing is a great game which very much relies on and rewards in the moment decision making and player skill is the single most important factor in who will win.

So to compare in my opinion the outcome of a 40k games vs a X-wing game are determined by:

Again that's just my opinion based on my own experiences.  I love 40k's lore and 30k is a lot more fun, but playing matches of 40k nearly always tends to be a big let down.  The game could improve with time, and seems to be right now, but in my view the core rule set of of the game needs some dramatic changes as it has a lot of anachronisms left over from 3rd edition which no longer deliver the experience they were created to deliver.

Oh and oddly if I really wanted to boost my viewership I should just post articles and conversions of X-wing stuff.  My most viewed 40k conversion posts have about 300-500 views a piece, and every x-wing post has between 1,800 and 3,500 views.  Does anyone have any advice on how to draw more eyes from the 40k community?

As I mentioned before I decided to make a number of MkIV armor legionaries in this batch for variety's sake and for the challenge of it.  I'm very pleased with how this batch came out, all of the poses work and I've refined the anatomy quite a bit.  I have come to the conclusion over time that the arms are about 15% too thick, and this has been causing some issues when posing the models.  Now that my molds are officially worn out I'll revise the masters a bit and decrease the arm thickness for future batches.

Here are the individual models.


While fielding a 20 man Legion Tactical Squad is awesome there is the issue of needing 2 compulsary Troop choices, that and a 20 man squad can be quite unwieldy in smaller matches.  So I made this guy who can either count as a sergeant or as a standard model depending on how I decide to run them in a match. 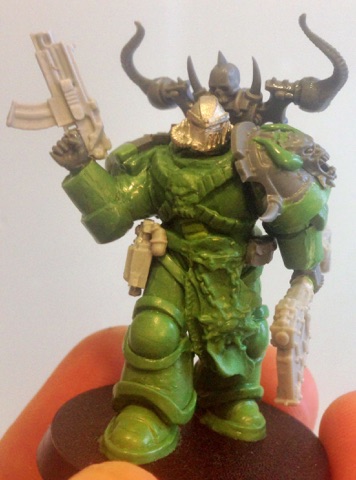 It's been about a year since my last 40k game, but this past Saturday was my first league match for the local shop's escalation league. Apparently the shop has 20 players enrolled for the league, and there's another league for beginners as well. For any kind of event that is a great draw, and for a league it's awesome.

My first match was vs Chris, who I've played with on and off for the last 15 years or so. He's playing Orks and I'm fielding 30k Word Bearers. The first week games are 500 points and we were all told to include at least 1 HQ and 2 Troops units. Small points values do tend to advantage certain armies and disadvantage others, I'm honestly not sure if Orks are advantaged or disadvantaged at this small of a points level, but 30k lists have a rough time.  Particularly Word Bearer's due to the need to always take a Chaplain or Diabolist IN ADDITION to your Compulsary HQ choice.  Chris allowed me to ignore that rule for our match, which was kind of him.

We played on a 4' x 4' table an didn't bother to place objectives, overall the match lasted between 30-45 minutes. 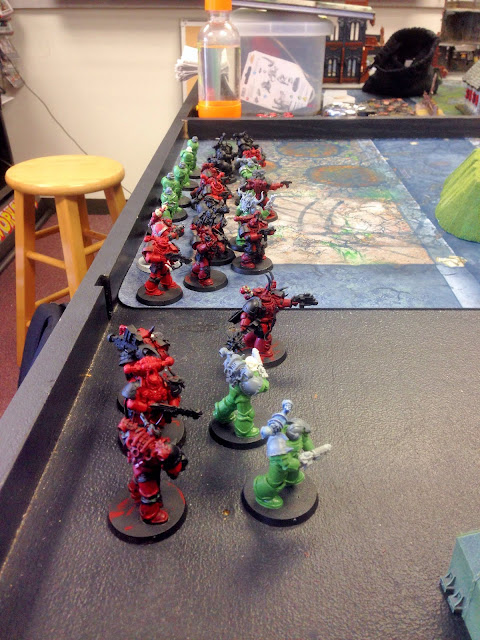 The next batch of Truescales is finished and ready to be primed.  My local shop has a 40k escalation league starting up this coming weekend, so I've been working hard to get enough finished to be able to run my Word Bearers as an army on their own rather than just an ally to my Warp Cult/Renegades army.

The league starts at 500 points so I figure one Legion Tactical Squad, a Chaplain, and a Legion Support Squad with flamers would fill that out pretty nicely. 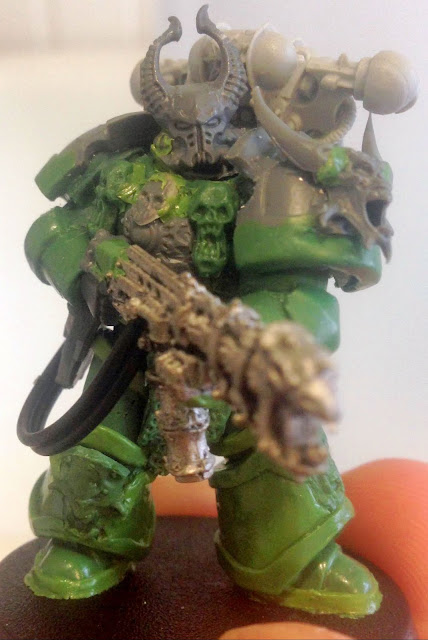